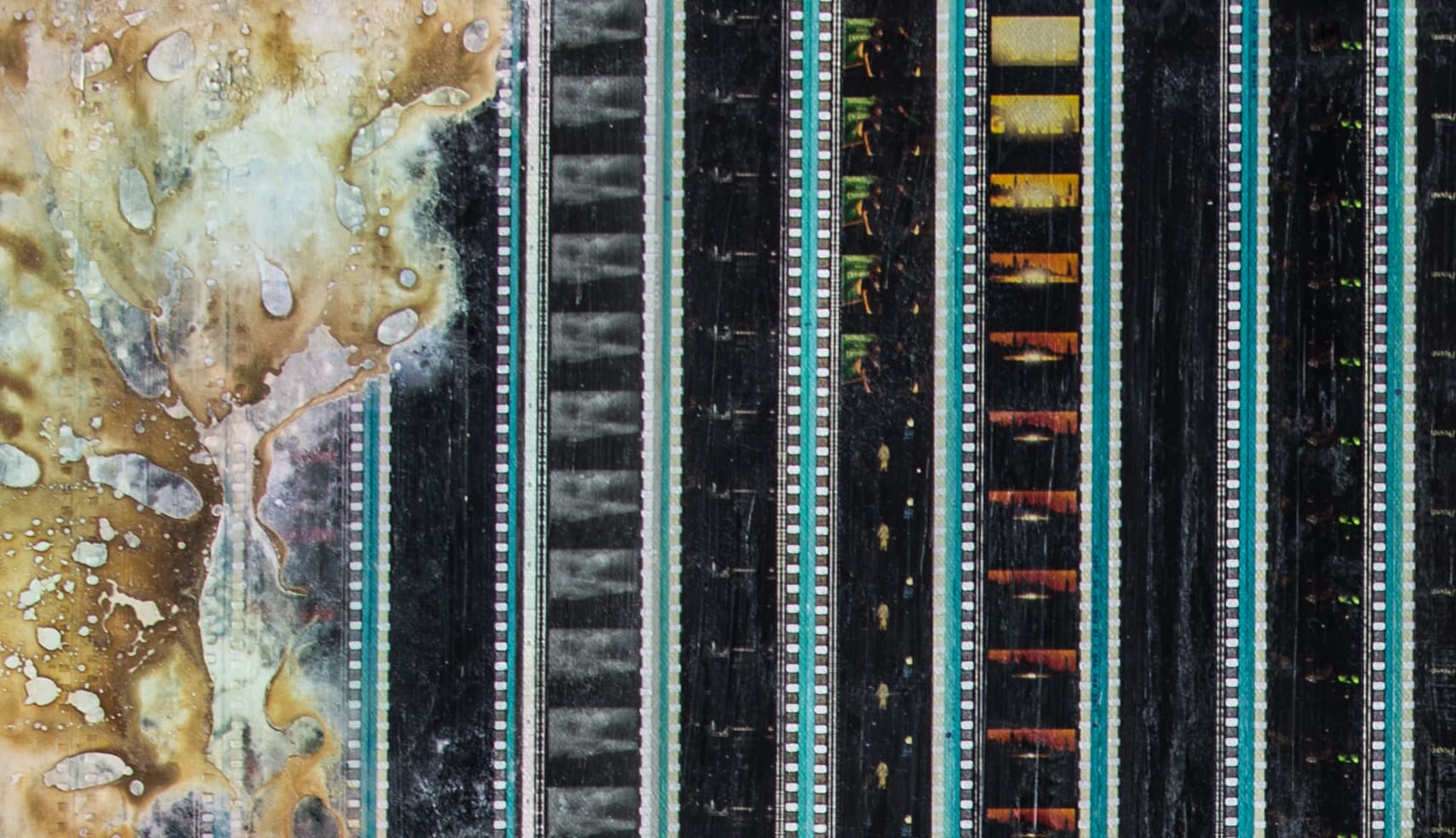 The tinseled show is nearly halfway through its one-month run at Art on Scene in West Hollywood now. Our opening event was last weekend, and it yielded a nice (and much appreciated) turnout of art-lovers, philosophers, and friends, young and old, some well known, some newly met. We had a great time, and luckily, got rid of a respectable supply of wine so we didn’t have to carry it all the way home. Everyone who came had great things to say about the art. I think some were surprised to see the artist looking dapper in a well-cut suit, though I’m not sure if they were expecting him to make his debut in paint-spattered cargo shorts, or a disco ball onesie. Anyone who knows Tyson knows it could have played out in any number of ways.

I was feeling very good about the pieces, about the display, about the feedback, and then Sunday rolled around and I spoke with one guest at the opening who admitted she thought the art was going to be really bad, and was surprised at how different it was in person. She mentioned the film pieces (Silver Screen series) specifically, saying she thought the paintings were just film strips with brown clouds painted over the top from the Facebook photos I’d posted. In person, she said, she wanted to study them at length and found them quite beautiful.

It’s funny timing for this to come back at me from an external source, because this conundrum has been the focus of many a pondering lately. Let me explain some backstory before I get into why this presents a conundrum at all.

Much of Tyson’s work is licensed to the Daleno, Inc. digital catalog. Daleno is one of many companies that reproduce original works by taking high resolution photographs of the art, then having them printed on canvas. Sometimes embellishment is added; this is when paints and gels are applied over the tops of these printed canvases by hand so the piece more closely mimics an original by adding brush stroke texture. Sometimes embellishment includes metal leaf, or even glitter. These are the kinds of paintings you might pick up in a store like Z-Gallery, Bed, Bath & Beyond, Crate & Barrel, or West Elm. These embellished prints on canvas are great if you’re on a tight budget and want something higher-end than prints and posters for your space. But let’s be clear: when you are looking at a printed painting, you are not getting a full experience of that art piece.

The first art I really remember loving when I was kid was that of Van Gogh and 19th Century French impressionists. Everyone knows Starry Night. Most would probably agree the work is compelling because of his impasto technique: those thick strokes in which you can see the swirls of color pulled right off the palette in chunks onto the bristles of a rough brush. It’s that feeling of connection with the artist’s process and that illusion of having a tangible experience with the art (can you imagine Vincent’s wrist making deft circles and curves, the paint sliding on as he completes the stars?), that makes us love it. That said, when, for the first time, I stood before my first real Van Gogh — a self-portrait that hangs in the Norton Simon — the world around me fell away. The light and shadow caught every brush stroke, every bit of canvas grain, every nook and groove in that painting. I couldn’t breathe. Being within the physical space of a masterpiece is nothing at all like seeing a print, and even further from what you would see in a candid photo. You lose almost all the nuance for the pieces in which texturing and layers play a large part, but even an original screen print is a wonder, when you can see the thin layers of ink, layer after layer, each of which the artist has applied manually. The texture is subtle, but the richness and depth of the piece, and to see the work of the artist’s hand, to me, is everything. 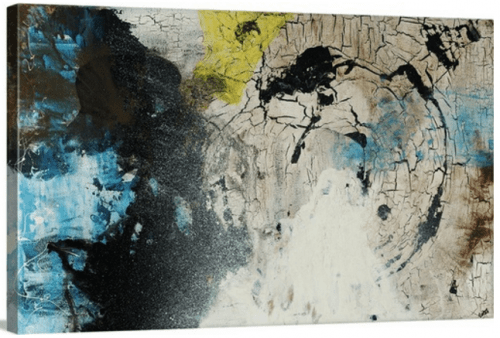 One of Tyson’s first paintings that was picked up for digital distribution was this one (pictured). The original work was a monster at 10′ x 6′. The cracks in the surface were deep, revealing subtle color changes underneath, and the white spatters at the bottom added this crazy dimension that you just don’t see in a photo. But we were still pretty jazzed that this painting was being reproduced for a couple clients, and the painting still looked pretty cool in the catalog. That is, until we saw the first large scale canvas print of this piece. The flatness of the print, meaning, the lack of actual, physical depth and layers, serve to make this piece much less exciting and engaging in print than it was in its original form.

Back to the Point

Yesterday, after I’d been presented with this interesting feedback on my promotion attempts, I went back to look at the photos I’d posted prior to the show. It was only after looking at the pieces as someone who’d never seen them in person that I realized it was true, what the critic had said: the film pieces looked like glued-down strips of film with brown poo clouds painted all over them. (Spoiler alert: They actually look nothing like brown poo clouds.)

We want to promote Tyson’s work. We don’t want to give it all away before a showing, but we want to give teasers of the art so people will come out and see the show. The problem is in our ability to adequately photograph the works to convey what they actually look like. This set of paintings was far more challenging than most because, as the name of the show (tinseled) implies, Tyson has used metallic paints, leaf, and even metal boxes as the base for each of the paintings in the exhibition. This use of metals and metallic substances, plus the high-gloss finishes, made photographing these shiny, glittery pieces as you would experience them in person nearly impossible.

I decided to begin this Art Up-Close series with some details of Tyson’s film strip pieces, and will be cycling through the rest of the paintings, set-by-set.

The base of the canvas is silver leafed so light reflects back up through the film strips. The 35mm film strip patterns   have been created using film from twelve Hollywood classics, including Lawrence of Arabia. A hand-painted treatment over the tops of these pieces is inspired by silver nitrate film burn. It’s tough to see in photos, but in the closest detail image (no. Silver Screen #2, detail b) you can see that under the “burn” there is a full spectrum of color when the light catches it right. What I couldn’t manage to capture was the silver leaf showing through, which creates a really beautiful effect, and, as with all the tinseled pieces, causes the Silver Screen pieces to change as the day’s light shifts and changes.

The patterns in the film layouts themselves are really great, too. It’s the kind of painting you want to get intimate with, run your hand over the surface and touch the “burns,” see if you can pick out what’s happening in the film scenes. (Do it, by the way. Touch it. Feel it all over. You won’t hurt it.)

Here’s the detail in which you can see the burn effect a little closer: 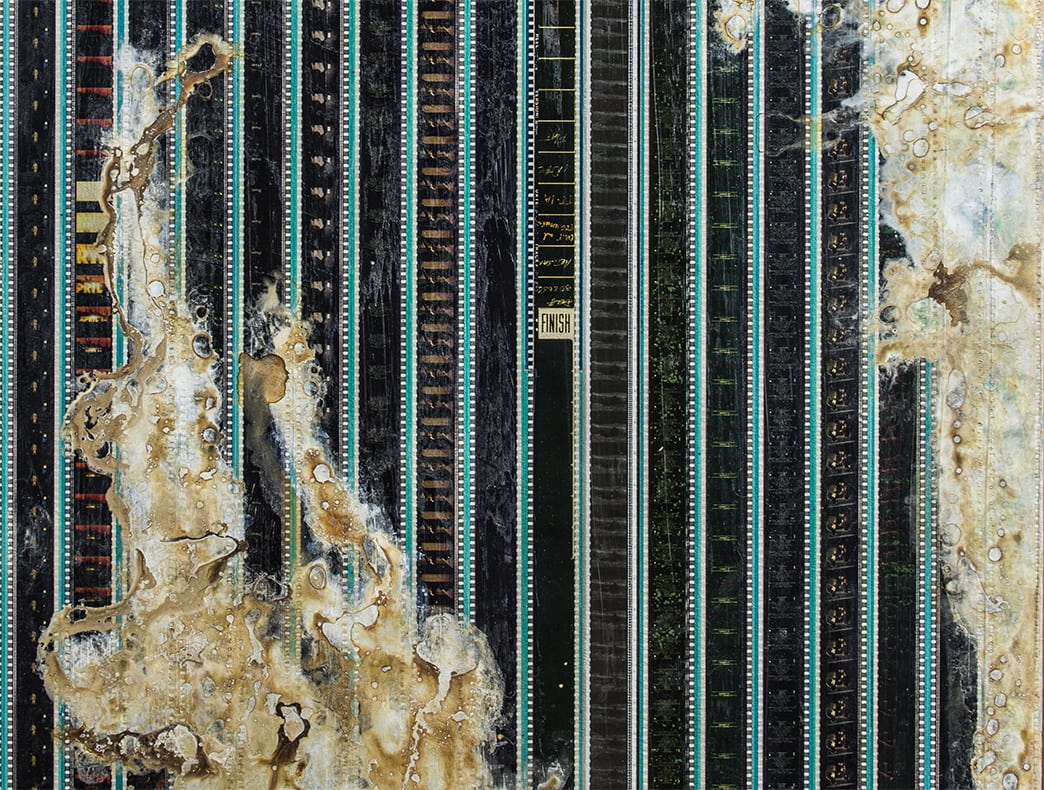 And here’s where you can see a subtle rainbow of color under the burn, when the light is right:

I hope this first installment of Art Up-Close helped showcase some of the beauty of these pieces that isn’t quite so apparent when viewed from afar. If you live in Los Angeles, be sure to make it by Art on Scene (Sunset @ La Cienega) before October 23, 2016.

This site uses Akismet to reduce spam. Learn how your comment data is processed.

Scroll back to top